Looking for a Premier League betting site in your state?
Check out our licensed sportsbook and bet on live Premier League games with a $500 RISK FREE BET!

Are you new to soccer betting?
Wondering how you can start betting on Premier League games online?
You can bet on the Premier League from the US in four easy steps:

Now that you know you live in a state where Premier League betting is legal it's time to move on to step two.

Check out a licensed betting site, like Unibet, or download their betting app and get a feel for the latest Premier league betting odds and lines!

You can check out the latest Premier League betting lines and odds for free in online sportsbooks.
If you want to place your bets with real money though, you need to sign up with the sportsbook and make a deposit.

You can sign up with Unibet's betting sites in less than 90 seconds.

When you sign up with our betting site, you also get a free $500 RISK FREE BET!

That's it!
Now you're all set to make your first bet.
We told you it was going to be easy!

How Does Premier League Betting Work in the US?

The English Premier League has a huge following all over the world. Some of the most successful teams in soccer play here and they frequently attract the greatest players in the game.

The EPL also has a loyal following on Unibet. Our betting community love the English top flight. If you want to know what all the fuss is about, just read on.

Before you start betting on Premier League soccer games, you will need to know the answers to two key questions: 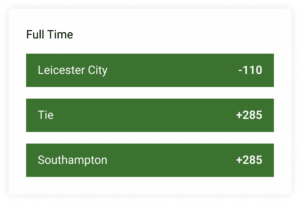 In any soccer match there are three possible outcomes. If we are betting on the result, the options are a win for either side or a draw.

In this game, Leicester City have a minus symbol in front of their figures. This means that they are the favorites to win. Southampton and the draw carry plus (+) prefixes. They are the underdogs here.

Instantly, we’ve dealt with probability. According to this bet. Leicester City have a greater chance of winning.

The other purpose of odds is to tell us how much we will be paid if our bet wins. The answer to this question lies in the specific numbers.

Of course, your bet has to win. If you stake on the right pick, those are your expected payouts.

Public betting in the Premier League

Our odds setters aren’t just there to decorate the office. They will confirm the final odds but the public gets the ball rolling.

Do you bet with the public or against them? The final decision is yours and we’ll give you some advice on that point later on.

What Premier League bets are Available?

You’ve seen the first one. Result betting in soccer is known as ‘Full Time’ It’s much the same as the Moneyline bet in other sports, We’re betting on who we think will win the game; Alternatively, we can get behind the draw.

This is the starting point but there are many more bets on the table.

Totals betting appears in all team sports and soccer is no different. Goals win games and that’s where we’re focusing. 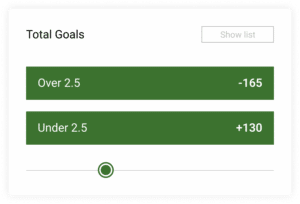 The goal line has defaulted to 2.5. You can’t hit that line so there are just two options. Do you bet Over or Under?

If you bet over the line and there are three goals or more, wins will pay at odds of -165. If the match contains two goals or fewer, wins are met at +130.

What are the different bets you can drop on the Premier League from the US?

Now Let’s move on to another bet.

The line may default to 2.5 here but there are other options.
See the green circle at the bottom of the image? That is a slider and it puts you in control of your own bets.

Here’s an alternative from the same game:

We’ve slid the slider to the right and pushed the goal line up by one notch. Now we have one set of odds with a plus prefix. If you thought this would be an attacking game with lots of goal action, sliding to Over 3.5 could be worth considering.

If there are four or more goals in this fixture, winning bets pay at +160. The Under bet has shortened as a result. If there are three goals or fewer, the winning odds pay at -200.

#2: Both Teams to Score bets in the Premier League

There are just two options here. If you think Both Teams will Score you bet ‘Yes’. If not, you stake on ‘No’. Here’s Both Teams to Score in action. 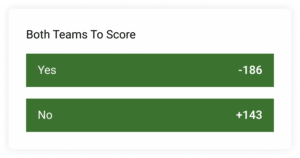 If you bet on Both Teams to Score and that bet wins, you’ll be paid at -186. If either, or both teams shut the opposition out, winning bets pay at +143.

You may see Both Teams to Score shortened to BTTS. With just two possible outcomes, it’s one of most popular bets in premier league games.

#3: Props bets in the Premier League

Props appear for all soccer games and Premier League betting is no exception. But what is a prop?

It’s short for proposition. We are proposing that an event might occur in the game. These bets come in two forms. There are player props and team props. Some examples include:

Props such as these can appear in all soccer matches. Because the Premier League is so popular, there may be more of these bets than in other divisions. Finding them is simple. Click on the game that interests you and scroll down past the main bets.

#4: Outright bets in the Premier League

Grab your crystal ball, we’re about to look into the Future. The clue is in the name here: A Futures bet is long term stake on an event that will be decided at the end of the season.

In many soccer competitions, it’s all about the winning team. The popularity of the English Premier League leads to more options.

Futures have their own page on the sportsbook. Find the Premier League betting page and click on the separate ‘futures’ tab.

Pardon us but what’s a parlay? It’s simply a bet with at least two picks. In other parts of the world, it might be called a straight line multiple. This is because the bets are in a line and all of them must win.

If one or more picks fail, the line is broken, and the bet is lost.

Parlays can be staked on a single Premier League game like this: 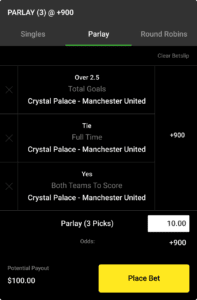 In this soccer game in the Premier League between Crystal Palace and Manchester United, we’ve made three picks. We’re betting on the draw, Over 2.5 Goals and Both Teams to Score. This is known as a single game parlay.

When your Unibet betslip opens, the odds update each time you add a pick in your parlay in the premier league. When you type in your preferred stake, the total outlay is shown. All the work is done for you. All you need to do now is click on the yellow button and the bet rides.

Parlays can also be spread across more than one premier league game: Here’s what we mean: 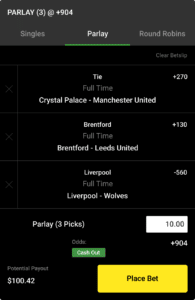 This is a 3-leg parlay from the same game week in the EPL. We’ve stayed with the draw on Palace v Manchester United and we’ve added Brentford and Liverpool to win. The odds are +904 but we need all three of those picks to land.

If they are successful, we win at +904. If one or more fail, the stake is lost

Now you know what Premier League bets are available. We could just release you into the wild now, but we’d prefer to leave you with some advice instead./span>

We’ve been offering our soccer loving customers in Europe and around the world a chance to bet on Premier League games and we’ve learned some interesting things. Here are some that could possibly help you turn the tide in your favor./span>

You can bet with the public by backing the favorite in a premier league game you’re planning to bet on. The alternative is to bet against them and go with an underdog. The public won’t be right 100% of the time but remember that they are working with probabilities.

The favorite has a higher chance of winning. In that game between Liverpool and Wolves, Liverpool are the stronger team. That’s based on league positions, among other factors.

Liverpool won’t convert each time, but they are the better team. So, do you bet with or against the public? Here’s how you can decide.

You should make up your own mind. How do you do that? By conducting your own research.j
Here are some things to consider:

Unibet list stats relating to recent form. We’d suggest looking at the last six matches to see how a team is playing.

Head-to-head results can also offer indicators. Does your preferred team have a good record against their upcoming opponents?

Injuries and any other absences can weaken a side. Check the team news before placing your bet.

Home advantage can also be a factor. This may be reflected in the odds, but you should certainly study form at home and on the road.

Parlays aren’t for everyone, but they can be a good option when you have more experience. When you’re just starting out, we recommend beginning with the Full-Time result in the premier league. It’s a simpler equation even if picking the winner isn’t quite so easy.

Other types of bets test different areas of research. If you’re getting involved in goals betting, you’ll need to check the scoring stats. Betting on player props means studying the individual’s record.

It’s a diverse platform and you should consider the options carefully.

Unibet are crazy about odds and we are competitive in the industry. To boost your value, be sure to opt in for notifications about offers and promotions. You can also keep checking the promotions tab for some limited time betting promos for the premier league.

Enhanced odds, matched bonuses and free bets may appear subject to terms and conditions. It’s an active part of the sportsbook and we don’t want you to miss these offers.

Boost your cash with our parlay boosts!